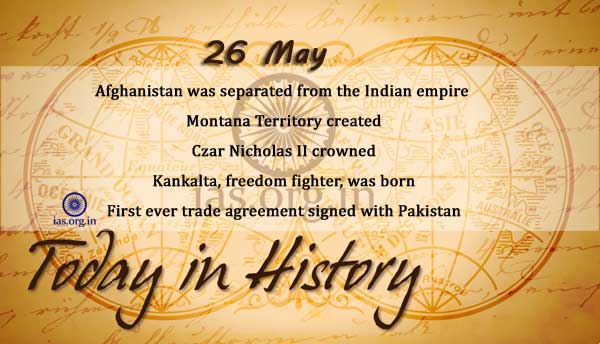 Afghanistan was separated from the Indian empire as a result of a treaty signed between Mughal Emperor Muhammad Shah and Nadir Shah.

Anxious to create new free territories during the Civil War, U.S. President Abraham Lincoln signed an act establishing the Montana Territory. However, as Montana was on the unstable frontier, it did little to add to the integrity of the Union, and Sidney Edgerton, the territory’s first governor, fled after suffering through several months of Indian raids.

Confederate General Edmund Kirby Smith, commander of the Confederate Trans-Mississippi division, surrenders on this day in 1865, one of the last Confederate generals to capitulate. Smith, who had become commander of the area in January 1863, was charged with keeping the Mississippi River open to the Southerners. Yet he was more interested in recapturing Arkansas and Missouri, largely because of the influence of Arkansans in the Confederate Congress who helped to secure his appointment.

Nicholas II, the last czar, was crowned ruler of Russia in the old Ouspensky Cathedral in Moscow.

Benjamin Peary Pal, internationally famous scientist of Indian agriculture, was born at Mukundpur, Punjab. In 1929, he went to Cambridge to do research on wheat and he returned to Burma with a PhD. five years later. In 1933, he got a research job with what was now known as the Indian Agricultural Research Institute in New Delhi. In 1965, Pal became Director General of the newly founded Indian Council of Agricultural Research in New Delhi. He has written several books on roses, the most popular being “The Rose in India”.

Kankalta, freedom fighter, was born in Bargawadi village at Assam . She was shot when she tried to flur the Indian National Flag in Gopur, Assam.

One hundred miners were trapped beneath a blazing mine. It was thought that there were unlikely to be any survivors in Madras.

On this day in 1940, American President Franklin D. Roosevelt had made known the dire straits of Belgian and French civilians suffering the fallout of the British-German battle to reach the northern coast of France, and appealed for support for the Red Cross.

Gandhiji considered ‘Plan’ the best document produced by British Government under the circumstances.

Satya Pal Asija, in the USA, was the first to obtain a patent for computer programme Swift Answer (an acronym for Special World Index Full Text Alpha Numeric Storage With Easy Retrieval). This programme empowers the users to retrieve narrative information from Computers in a human like manner.

The Centre decided to implement the Mandal Commission recommendation to provide 27% reservation for the socially and educationally backward classes in the Central Services from 15th June.

Government decided to allow the use of environment-friendly LPG as a motor vehicle fuel.

IRS-P4(OCEANSAT) with an Ocean Colour Monitor (OCM) and a Multi-frequency Scanning Microwave Radiometer (MSMR) and two small satellites (KITSAT of Korea and TUBSAT of Germany) launched by PSLV-C2.