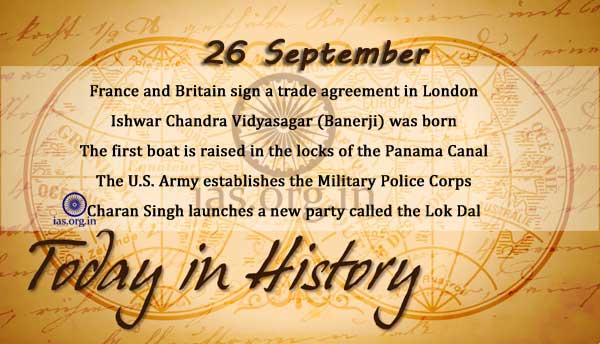 France and Britain sign a trade agreement in London.

Ishwar Chandra Vidyasagar (Banerji), great Indian educationist, social reformer, litterateur, father of Bengali prose and who gave the Bengalees their first Primer in 1855, was born in the village of Birsingha in Midnapore district of Bengal.

The first boat is raised in the locks of the Panama Canal.

Gandhiji breaks fast on Indian government’s acceptance of his demand regarding Harijans.

Gandhiji was interviewed with Wavell.

Notification to pay equal payment to both men and women workers was promulgated.

Constitution (39th Amendment) Bill 1975, placing election of the President, Vice President, Prime Minister and Speaker of the Lok Sabha beyond the scrutiny of the judiciary, approved by Parliament.