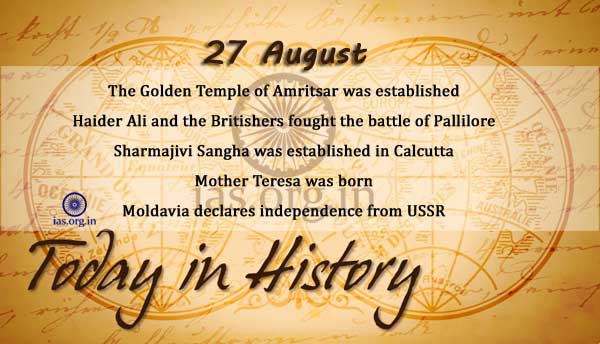 Guru Granth Sahib was established in the Golden Temple of Amritsar.

The Americans are defeated by the British at the Battle of Long Island, New York.

Haider Ali and the Britishers fought the battle of Pallilore.

The Allies defeat Napoleon at the Battle of Dresden.

Edgar Rice Burrough’s Tarzan of the Apes first appears in a magazine.

Major-General (Kumari) Gertude Ali Ram, the first women General in Indian Army, was appointed as the first Director of Military Nursing Services at the Army Headquarters.

Lord Mountbatten is killed by an Irish terrorist bomb in his sail boat in Sligo, Ireland.

India’s cricket sensation Sachin Tendulkar has an audience with the legendary Sir Don Bradman at the latter’s 90th birthday celebrations in Adelaide.