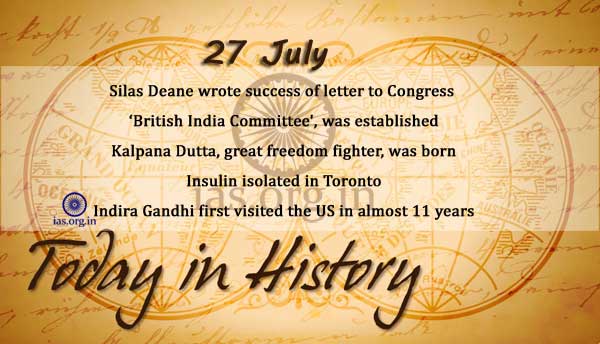 The secret Congressional emissary to France, Silas Deane, wrote a letter to Congress, informing them that he has been successful beyond his expectations in France.

Maximilien Robespierre, the architect of the French Revolution’s Reign of Terror, was overthrown and arrested by the National Convention.

Branch of Indian National Congress, ‘British India Committee’, was established under the leadership of Dadabhai Navroji.

At the University of Toronto, Canadian scientists Frederick Banting and Charles Best successfully isolated insulin–a hormone they believe could prevent diabetes–for the first time. Within a year, the first human sufferers of diabetes were receiving insulin treatments, and countless lives were saved from what was previously regarded as a fatal disease.

Princes were appealed to regard people’s paramountcy as a privilege.

After three years of a bloody and frustrating war, the United States, the People’s Republic of China, North Korea, and South Korea agreed to an armistice, bringing the Korean War to an end. The armistice ended America’s first experiment with the Cold War concept of “limited war.”

On this day in 1974, the House Judiciary Committee recommended that America’s 37th president, Richard M. Nixon, be impeached and removed from office. The impeachment proceedings resulted from a series of political scandals involving the Nixon administration that came to be collectively known as Watergate.

Parliament voted to ban tests for determining the sex of an unborn child, as these tests have resulted in thousands of aborted female fetuses.