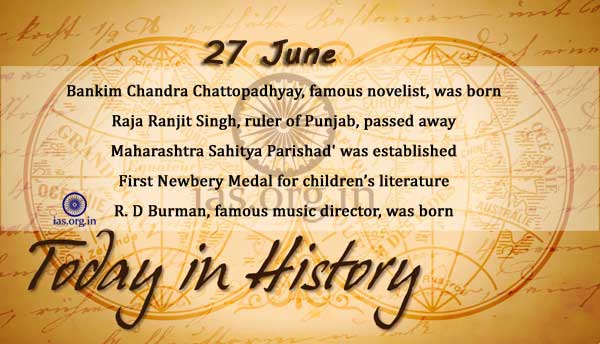 Bankim Chandra Chattopadhyay (Chatterjee), famous novelist, “the father of modern Indian fiction” and writer of national song ‘Vande Mataram’, was born at Katalpara near Naihati, West Bengal. Some of his writings are ‘Anandmath’ and ‘Kapal Kundala’.

On this day in 1922, the American Library Association (ALA) awarded the first Newbery Medal, honored the year’s best children’s book, to The Story of Mankind by Hendrik Willem van Loon.

On this day in 1940, the Germans set up two-way radio communication in their newly occupied French territory, employing their most sophisticated coding machine, Enigma, to transmit information.

President John F. Kennedy appointed Henry Cabot Lodge, his former Republican political opponent, to succeed Frederick E. Nolting as ambassador to Vietnam. The appointing of Lodge and the recall of Nolting signaled a change in U.S. policy in South Vietnam.

Environmentalist and ‘Chipko’ leader, Shri Sunderlal Bahuguna ends the 49-day old fast in demand for a scientific review of the controversial Tehri dam project in UP.

The Clinton administration rejected a demand by 21 U.S. Congressmen for declaring India a terrorist state in the wake of attacks on Christian priests and churches.

Maneka Gandhi, Union Minister of State for Social Justice and Empowerment, launched National Initiative for child protection of which childline is an integral part.