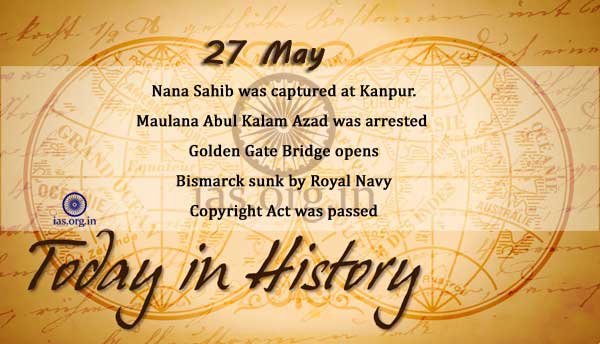 Nana Sahib was captured at Kanpur.

Gandhiji writes to his brother Lakshimidas, stating his disinterestedness in worldly possessions.

In the early morning hours of May 27, 1918, the German army began the Third Battle of the Aisne with an attack on Allied positions at the Chemin des Dames ridge, in the Aisne River region of France.

Sugere C. Sullivan and William C. Taylor were issued a patent for the Pyrex glass. Pyrex is the trademark for their Sodium borosilicate glass.

India’s major cities seethed with unrest following the arrest of Mahatma Gandhi and thousands of his followers in the campaign of civil disobedience against British rule. Due to Civil unrest in Bombay,  at least six persons were killed and sixty injured.

On this day in 1937, the Golden Gate Bridge, connecting San Francisco with Marin County, California, officially opened amid citywide celebration.Named for the narrow strait that marked the entrance to the San Francisco Bay from the Pacific Ocean, the Golden Gate Bridge was constructed from January 1933 to May 1937. At the time, it was the longest suspension bridge in the world, at 4,200 feet.

On May 27, 1941, the British navy sank the German battleship Bismarck in the North Atlantic near France. The German death toll was more than 2,000.

The trial of nine men accused of assassination of Gandhi initiated before a special court judge that ended on 30th Dec.

Gulzarilal Nanda was entrusted the responsibility as Acting Prime Minster of India. He held this office till June 9, 1964.

Pandit Jawaharlal Nehru, first Prime Minister and architect of modern India, passed away at the age of 74.

Soviet President Leonid Brezhnev and U.S. President Richard Nixon, meeting in Moscow, signed the Strategic Arms Limitation Talks (SALT) agreements. At the time, these agreements were the most far-reaching attempts to control nuclear weapons ever.

National Centre for Labour launched in Bangalore to give a boost to the unorganised worker’s movement in India.

A. B. Vajpayee, PM, saught vote of confidence in his 12-day old govt.

Minoo Masani, 92, co-founder of the Swatantra party, passed away in Mumbai after a brief illness.