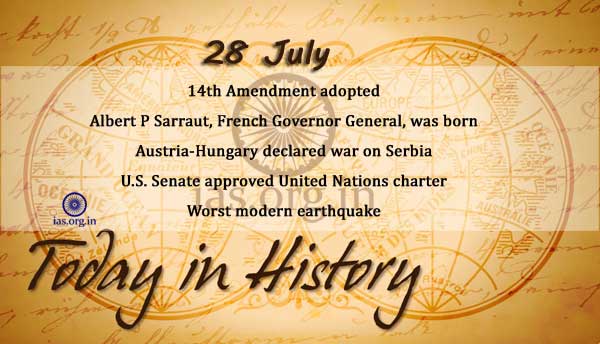 Following its ratification by the necessary three-quarters of U.S. states, the 14th Amendment, guaranteeing to African Americans citizenship and all its privileges, was officially adopted into the U.S. Constitution.

Japanese boat ‘Kamagata Maru’ was compelled to deport to India from Vancouver, Canada. The ship was boarded with active freedom fighters who were against the British Government.

On July 28, 1914, one month to the day after Archduke Franz Ferdinand of Austria and his wife were killed by a Serbian nationalist in Sarajevo, Austria-Hungary declared war on Serbia, effectively beginning the First World War.

The All-India Congress Party votes to boycott a forthcoming visit by the Prince of Wales and urges a boycott of imported cloth.

During the Great Depression, President Herbert Hoover ordered the U.S. Army under General Douglas MacArthur to evict by force the Bonus Marchers from the nation’s capital.

On this day in 1943, the worst British bombing raid on Hamburg so far virtually sets the city on fire, killing 42,000 German civilians.

In a ringing declaration indicating that America’s pre-World War II isolation was truly at an end, the U.S. Senate approved the charter establishing the United Nations. In the years to come, the United Nations would be the scene of some of the most memorable Cold War confrontations between the United States and the Soviet Union.

At 3:42 a.m., an earthquake measuring between 7.8 and 8.2 magnitude on the Richter scale flattened Tangshan, a Chinese industrial city with a population of about one million people. The quake was especially costly in terms of human life. An estimated 242,000 people in Tangshan and surrounding areas were killed, making the earthquake one of the deadliest in recorded history, surpassed only by the 300,000 who died in the Calcutta earthquake in 1737, and the 830,000 thought to have perished in China’s Shaanxi province in 1556.

Mufti Mohammad Sayeed was disqualified from Rajya Sabha. It was the first case of such disqualification from the House under anti-defection law.