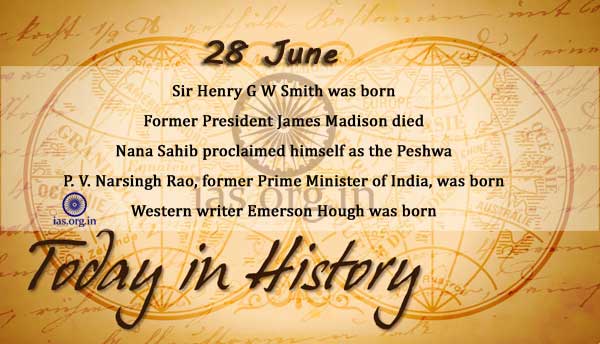 Nana Sahib proclaimed himself as the Peshwa and called for the total extermination of the British power of India at Bithoor.

Emerson Hough, one of the most successful writers of adventure novels of the romantic western genre, was born in Newton, Iowa.

The Soviet Union expeled Yugoslavia from the Communist Information Bureau (COMINFORM) for the latter’s position on the Greek civil war. The expulsion was concrete evidence of the permanent split that had taken place between Russia and Yugoslavia.

Prasanta Chandra Mahalanobis died. He was the first founder of Indian statistical Institute to receive world recognition. In 1958, he started his national sample surveys. A Sample survey means assessing a situation by studying a part of it which would represent the whole, some of his proposals were included in the second five year plan. His original work made him elected as fellow of the Royal society in 1945.

As a response to anti-government demonstrations, India imposed the toughest press censorship since independence.

Madhya Pradesh in central India was designated a “tiger state” to protect the animal from poachers and settlers.

India opened its office (based in Gaza city) in the area under the Palestinian Authority.