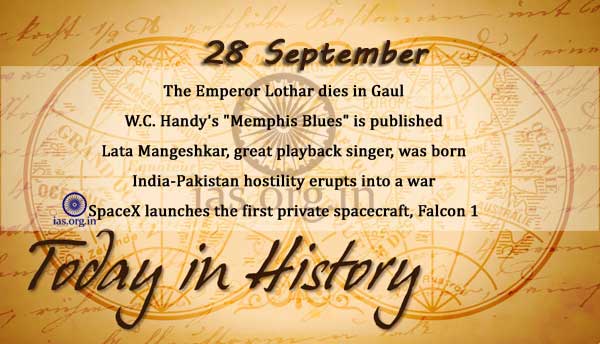 The Emperor Lothar dies in Gaul, and his kingdom is divided between his three sons.

James of Aragon retakes Valencia, Spain, from the Arabs.

A few mountain battery trains flourished and kept the Indian component alive as part of the Royal artillery. Recently, it has been established that 8 Company Bombay Artillery survived axing and is now 5 (Bombay) Mountain Battery. This day is now celebrated as the Raising Day of the Regiment of Artillery.

Bahadur Shah-II ascended the throne and became the emperor of Delhi at the age of 62 following the death of his father Akbar Shah-II.

In penance for riots, Gandhi, on hunger strike in Delhi, proclaimed he would break his fast only at death.

Pundit Sunder Lal Sharma, freedom fighter and social reformer, passed away. He was also known as “”The Chhattisgarh Gandhi”.

India-Pakistan hostility erupts into a war

The first Indian Army expedition, sailing around the world in a small 37 feet fibre glass yacht named “”Trishna””, sailed off from Bombay.