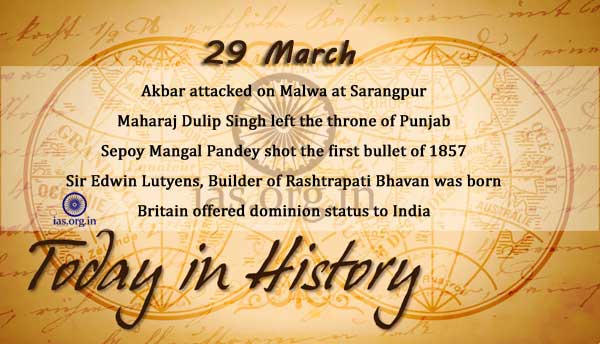 Akbar attacked on Malwa at Sarangpur and defeated Bajbahadar.

Maharaj Dulip Singh left the throne of Punjab that once belonged to his late father Ranjit Singh and was then occupied by the East India Company. The Britishers had captured it after defeating the Sikh Army at Amritsar.

Sepoy Mangal Pandey shot the first bullet of 1857 Indian mutiny in the barracks of Barrackpur near Calcutta against British Empire. This was the starting of the mutiny.

Sir Edwin Lutyens, Builder of Rashtrapati Bhavan and England’s most outstanding architect of his time, was born.

Britain offered dominion status to India after the war if it cooperated now.

India enters into a war with Japan.

Union Government revises the percentage of reservation in service for SC\STs from 12.5\% to 15\%.

The unmanned U.S. space probe Mariner 10, launched by NASA in November 1973, becomes the first spacecraft to visit the planet Mercury, sending back close-up images of a celestial body usually obscured because of its proximity to the sun.

The combination of an earthquake and a volcanic eruption at El Chichon in southern Mexico converts a hill into a crater, kills thousands of people and destroys acres of farmland

Central Institute of Fisheries Education gets the distinction of becoming the first Fisheries University in India.

A massive earthquake in the Garhwal region of Uttar Pradesh in the inner Himalayas claims 85 lives and more than 130 injured.