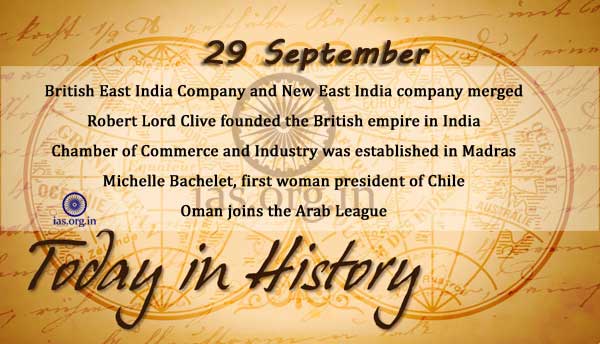 Chamber of Commerce and Industry was established in Madras.

Mormon leader Brigham Young is named the first governor of the Utah Territory.

A five-day work week is established for General Motors workers.

Germany and the Soviet Union reach an agreement on the division of Poland.

The British police shot Matangini Hazra, a 72-year old woman of Tamluk town in Midnapur district, when she was leading the flag at Tamluk in August movement procession.

Arati Saha successfully swam the English Channel. She was the first Asian lady to achieve the feat.

Delhi-Srinagar Indian Airlines Boeing 737 flight was diverted to Lahore, Pakistan by five Khalistan activists of the Dal Khalsa International. On board there were 117 passengers out of which 66 were freed on arrival in Lahore.