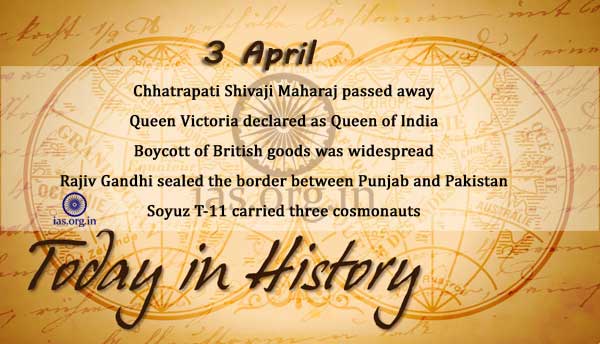 Chhatrapati Shivaji Maharaj, great Maratha emperor, patriot, soldier, freedom fighter, revolutionary and great son of India, passed away at Raigarh fort. His son Sambhaji succeeded to the throne on May (3 or 4).

Sikandar, former sultan of Vijapur, passed away at Satara in the imprisonment of Mughals.

Boycott of British goods was so widespread that 70% of cotton products were thought to have come from Japan.

Nehru announces that troops have been sent to Burmese border area to control Naga tribal people who are asking for a separate state.

Pandit Hridaynath Kunzru, social reformer, politician, passed away. He contributed greatly to public life, fighting against caste system, untouchability etc. He was closely associated to the ‘Servants of India Society’ and with Ghokhaleji. He even declined to accept the “Bharat Ratna” award.

Rajiv Gandhi seals the border between Punjab and Pakistan.

Indian National Satellite (INSAT-2E), fifth satellite in INSAT-2 series, has been launched. This has multipurpose communication & meteorological capabilities. This is still in use. Launched by European launch vehicle Ariane, ISRO has leased eleven 36 MHz equivalent units of C-band capacity on board to INTELSAT organisation.