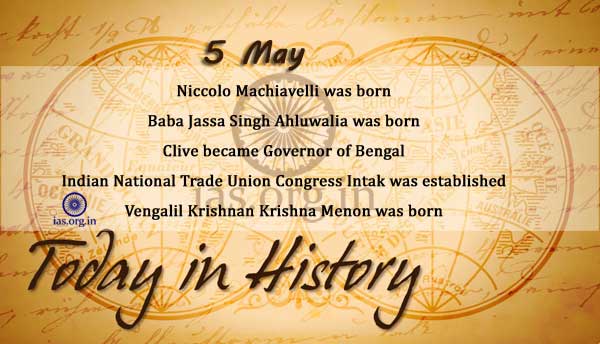 The Italian philosopher and writer Niccolo Machiavelli was born. A lifelong patriot and diehard proponent of a unified Italy, Machiavelli became one of the fathers of modern political theory.

Mir Kasim, with the backing of Delhi Emperor, attacked on Patna but this weak Emperor was defeated by Britishers. Britishers became the rulers of Bengal, the richest province of India.

Clive became Governor of Bengal for second time after he returned from England to Calcutta.

Dhundiraj Govind Phalke, more generally known as Dada Saheb Phalke, was responsible for the production of India’s first fully indigenous silent four-reel feature film ‘Raja Harishchandra’ which heralded the birth of the Indian film industry. The film had titles in Hindi and English and was released on May 3, 1913 at the Coronation Cinematograph in Bombay.

Hurricane-equipped squadrons played a major role in the Arakan offensive which began in December 1944, disrupting the enemy’s lines of communication and constantly harrying the Japanese forces until victory was achieved with the re-occupation of Rangoon.

Dr. Zakir Hussain(1897-1969), third President of India and the first Muslim President who occupied this office on 13 May, 1967, passed away. He is also remembered as an educationist.

Today in History – 2 May

Today in History- 1 May