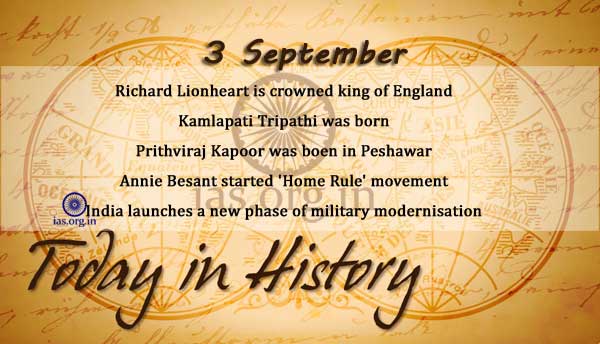 After the death of Henry II, Richard Lionheart is crowned king of England.

Colonel Smith was defeated in the battle of Changama that took place between the combined forces of Nizam and Hyder Ali and the British army. This was the first war of Mysore.

Prithviraj Kapoor, veteran film actor, was born in Peshawar. His first film was ‘Challenge’ (1929). He is the founder of Prithvi Theatre in Bombay.

The French capital is moved from Paris to Bordeaux as the Battle of the Marne begins.

The German Somme front is broken by an Allied offensive.

Ram Jethmalani (lawyer and MP) launches a new party, Bharatiya Lok Panchayat, to rid the country of its evils.

India launches a new phase of military modernisation after the Kargil conflict.