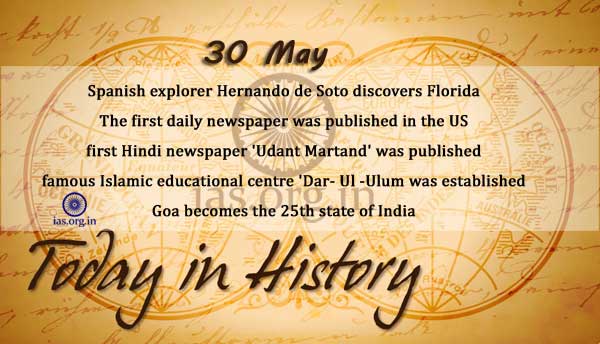 Hundred Years’ War: in Rouen, France, 19-year-old Joan of Arc was burned at the stake by an English-dominated tribunal.

The first daily newspaper was published in the U.S. by Benjamin Towner called “The Pennsylvania Evening Post”

The first Hindi newspaper ‘Udant Martand’ was published from Calcutta under the Editorship of Pandit Shridhar Shukla.

Rabindranath Tagore returned the honour as a protest against the Jallianwala Bagh massacre.

S.C.Mathur was appointed as the Narcotics Commissioner of India. He headed this office till 01-07-1955.

Notification issued for the constitution of Jharkhand Autonomous District Council