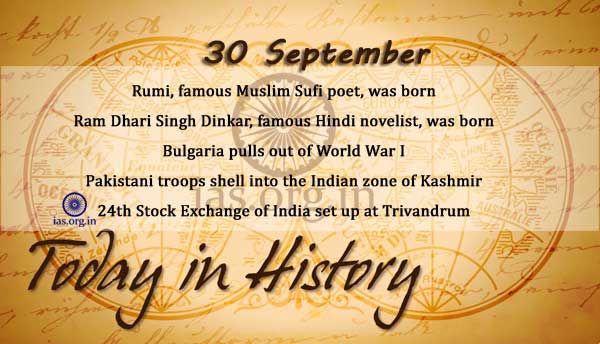 Aurangzeb acquired the famous Golconda fort near Hyderabad from the Qutub Shahi Sultan Tana Shah due to the treachery of his General Panni.

Italy declares war on Turkey over control of Tripoli.

Bulgaria pulls out of World War I.

The Berlin Airlift is officially halted after 277,264 flights.

The first atomic-powered submarine, the Nautilus, was commissioned in Groton, Connecticut.

The USSR openly louded Indian view on Kashmir issue. This was against Pakistan’s motives.

Pakistani troops shell into the Indian zone of Kashmir.

24th Stock Exchange of India set up at Trivandrum.