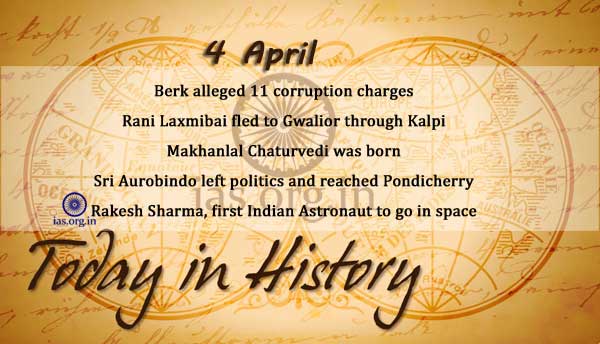 Rani Laxmibai fled to Gwalior through Kalpi after giving a solid blow to British troops.

Hiralal Sen and his brother Motilal Sen purchased a Bioscope Cinematographic Machine from London. The first show of imported films was arranged by them at Classic Theatre on April 4, after which they formed ‘The Royal Bioscope Co.,’ controlled by H. L. Sen & Bros., 85/2, Maszid Badi Street, Calcutta. The Bioscope Company started touring the provinces of Bengal, Orissa and Bihar.

Sri Aurobindo left politics and reached Pondicherry where he made the seat of Yoga.

Martial law was declared in Calcutta as rioting continues.

A. M. Chakrabarty was born in Sainthia at West Bengal. He found that under the optimum conditions of time, temperature and nutrients the Hydrocarbon-eating “qualities” of four diffrent strains of bacteria could be transferred into one. He also showed that this super-strain of bacteria reproduces itself.

Japanese Navy destroyed 3 British battleship to sink in the Bay of Bengal during the Second World War.

San Francisco’s Henry Grady had been chosen the first U.S. ambassador to India.

Squadron Leader Rakesh Sharma was the first Indian Astronaut to go in space from Baikanaur aboard Soviet Space Craft ‘Soyuz 11’ and revolved around the earth.

A. B. Vajpayee, Prime Minister, inaugurates Samvidhan.com, a website about the Constitution. The site is a part of the Hindi portal, Webdunia.com.