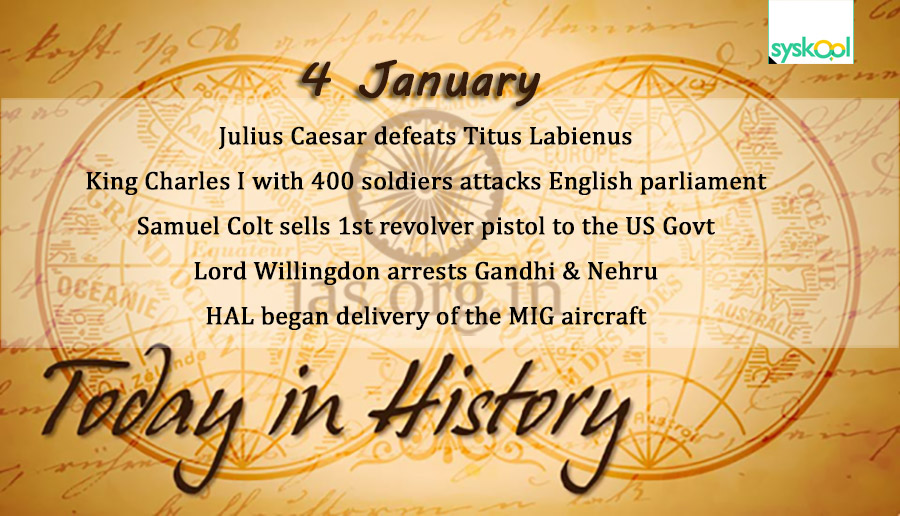 Julius Caesar defeats Titus Labienus in the Battle of Ruspina

King Charles I with 400 soldiers attacks the English parliament

Prince of Wales laid the foundation stone of Victoria Memorial Hall at Calcutta.

British Viceroy of India Lord Willingdon arrests Gandhi & Nehru. Mahatma Gandhi and other members of his All-India National Congress are back in jail again. After the collapse of the London conference, British authorities cracked down even harder on Gandhi and his followers, and the Mahatma urged Indians to increase their acts of civil disobedience. “Wake up from sleep,” Gandhi said as he ordered a boycott of British goods. “Discard foreign cloth. Discard narcotics. Discard violence. Defy all orders calculated to crush the national spirit.” The government declared Gandhi’s Congress an illegal organization. Under new laws, even peaceful picketing is illegal. The Congress party responded to the crackdown by recruiting more followers and striking more plants.

Burma achieved its independence from Great Britain. In 1989, Burma changed its name to Myanmar to reflect the multi-ethnic composition of the country. Apart from the Burmese, the main ethnic minority groups are the Karen, Shan, Mon, Chin, and Kachin. Just as the Burmese did against the British, almost all of these ethnic groups have struggled against the Burmese government for self-determination.