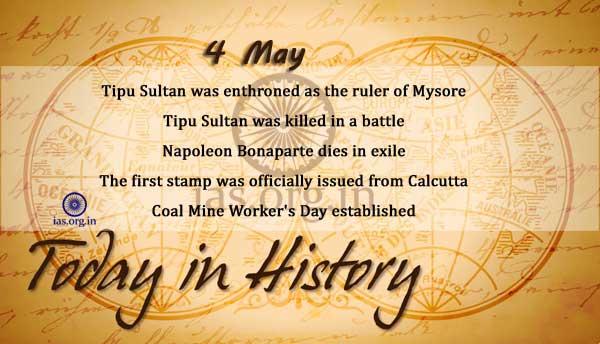 Tipu Sultan was enthroned as the ruler of Mysore after the death of Haider Ali in a simple ceremony at Bednur. He continued the Second Mysore War against the English. He defeated many EnglishGenerals like Brithwhite & Col. Bailey. Tipu Sultan signed the treaty at Mangalore on 11th March 1784 A.D. which was known as the Mangalore treaty.

Tipu Sultan was killed in a battle against 5,000 British soldiers who stormed and razed his capital, Seringapatanam.

Napoleon Bonaparte, the former French ruler who once ruled an empire that stretched across Europe, died as a British prisoner on the remote island of Saint Helena in the southern Atlantic Ocean.

The first stamp was officially issued from Calcutta where the first modern post office was established.

Nehru rejected proposals that India and Pakistan resolve their differences and set up a common alliance against Communist China.

From Cape Canaveral, Florida, Navy Commander Alan Bartlett Shepard Jr. who was launched into space aboard the Freedom 7 space capsule, became the first American astronaut to travel into space. The suborbital flight, which lasted 15 minutes and reached a height of 116 miles into the atmosphere, was a major triumph for the National Aeronautics and Space Administration (NASA).

Supreme Court directs Central Government to set up a Tribunal to resolve Cauvery water dispute between Tamil Nadu and Karnataka.

India and Russia sign a five-year agreement on trade and economic cooperation.

The fourth ASLV-D4 blasted off from Sriharikota, successfully placing the SROSS-C2 satellite in orbit.

India was placed on the US Special 309 watch list.

Today in History – 3 May

Today in History – 2 May

Today in History – 1 May