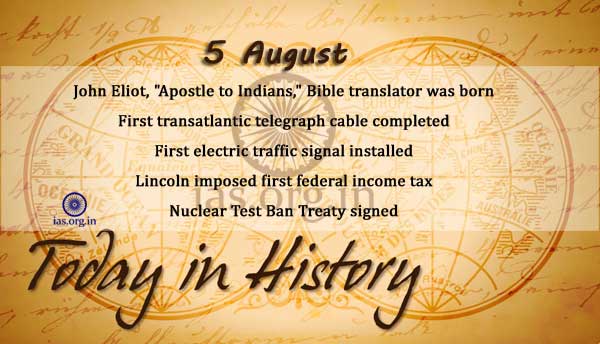 After several unsuccessful attempts, the first telegraph line across the Atlantic Ocean was completed, a feat accomplished largely through the efforts of American merchant Cyrus West Field.

On this day in 1861, Lincoln imposed the first federal income tax by signing the Revenue Act. Strapped for cash with which to pursue the Civil War, Lincoln and Congress agreed to impose a 3 percent tax on annual incomes over $800.

The world’s first electric traffic signal was put into place on the corner of Euclid Avenue and East 105th Street in Cleveland, Ohio, on this day in 1914.

On August 5, 1914, the German army launched its assault on the city of Liege in Belgium, violating the latter country’s neutrality and beginning the first battle of World War I.

Hundreds of Jews were freed from forced labor in Warsaw.

An earthquake hits Ecuador killing 6,000 people and injuring another 20,000 on this day in 1948. The 6.7-magnitude tremor was particularly deadly for its size.

Representatives of the United States, the Soviet Union, and Great Britain signed the Nuclear Test Ban Treaty, which prohibited the testing of nuclear weapons in outer space, underwater, or in the atmosphere. The treaty was hailed as an important first step toward the control of nuclear weapons.

The RSS, Anand Marg, Jamat-i-Islami, and 23 other organisations were banned. Parliament approved Conservation of Foreign Exchange and Prevention of Smuggling Activities Act (COFEPOSA). Maintenance of Internal Security Act (MISA) was approved by the Parliament.

Achyutrao Patwardhan, leader of ‘Quit India Movement‘, died at Varanasi at the age of 86.

The Global Peace March demanded demilitarisation of the entire planet.