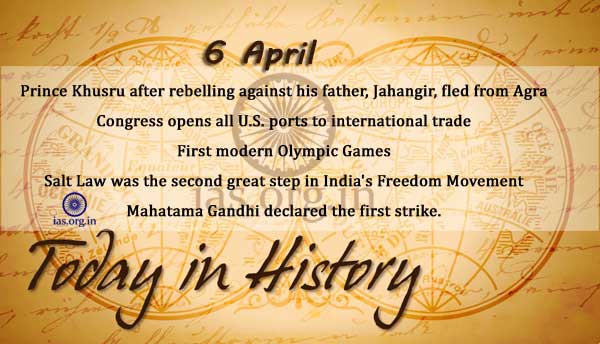 Prince Khusru after rebelling against his father, Jahangir, fled from Agra.

The Continental Congress takes the first step towards American independence by announcing their decision to open all American ports to international trade with any part of the world that is not under British rule.

On April 6, the Olympic Games, a long-lost tradition of ancient Greece, are reborn in Athens 1,500 years after being banned by Roman Emperor Theodosius I. At the opening of the Athens Games, King Georgios I of Greece and a crowd of 60,000 spectators welcomed athletes from 13 nations to the international competition.

Gandhiji submitted long memorial to Chamberlain, Secretary of State for Colonies, regarding landing incidents background. Carried on programme of petitioning local and Imperial authorities, as well as of communicating with British and Indian public men regarding discriminatory laws.

Mahatma Gandhi declared an All India Strike against the Rollatt Act .This was the first strike.

Mahatma Gandhi picked up a lump of natural salt for breaking the ‘Salt Law’. He was arrested at Dandi. This movement gathered strength and within a month about one lakh people were sent to jail. This violation of Salt Law was the second great step in India’s Freedom Movement.

During the second world war, for the first time Japanese air-bombers attacked India, and it took place at the mainland of Visakhapatnam.

India resumes export of marine products to the European Union; 25 units have been approved by the Export Inspection Council for exporting to EU countries.

The Sonia Gandhi era begins in the Congress(I) with a special AICC session ratifying the decision of the CWC appointing her President of the Party in place of Sitaram Kesri.

The Government permits use of LPG as auto fuel.