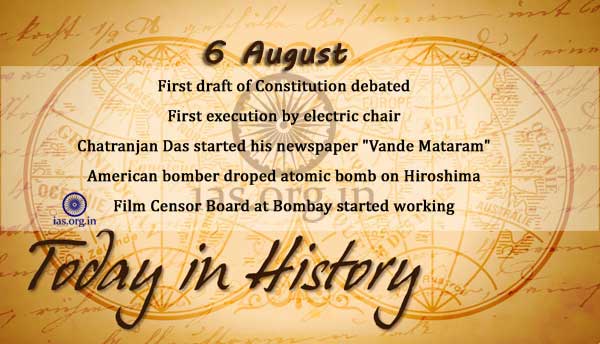 In Philadelphia, delegates to the Constitutional Convention began debating the first complete draft of the proposed Constitution of the United States.

At Auburn Prison in New York, the first execution by electrocution in history was carried out against William Kemmler, who had been convicted of murdering his lover, Matilda Ziegler, with an axe.

Film Censor Board at Bombay started working. The first film censored and granted a Censor Certificate No. 1 was a short film of 600 ft., produced by Gaumont Company and it was titled as ‘Gaumont Graphic No. 963-964’. The Regional Film Censor Boards were also set-up in Calcutta, Madras and Rangoon.

On this day in 1926, on her second attempt, 19-year-old Gertrude Ederle became the first woman to swim the 21 miles from Dover, England, to Cape Griz-Nez across the English Channel, which separates Great Britain from the northwestern tip of France.

On this day in 1930, New York Supreme Court judge Joseph Force Crater vanished on the streets of Manhattan near Times Square. The dapper 41-year-old’s disappearance launched a massive investigation that captivated the nation, earning Crater the title of “the missingest man in New York.”

On this day in 1945, at 8:16 a.m. Japanese time, an American B-29 bomber, the Enola Gay, droped the world’s first atom bomb, over the city of Hiroshima. Approximately 80,000 people were killed as a direct result of the blast, and another 35,000 were injured. At least another 60,000 would be dead by the end of the year from the effects of the fallout.

On this day in 1965, President Lyndon Baines Johnson signed the Voting Rights Act, guaranteeing African Americans the right to vote. The bill made it illegal to impose restrictions on federal, state and local elections that were designed to deny the vote to blacks.

Cabinet approved a proposal to amend the Hindu Marriage Act and the Special Marriage Act, with a view to removing epilepsy as a ground for annulling marriage or for declaring marriage as null and void.