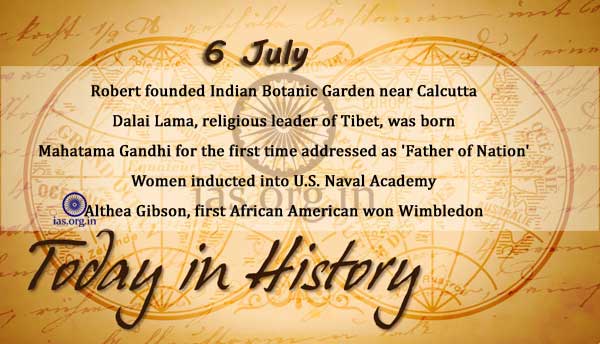 Ramkrishna Gopal Bhandarkar, a reputed oriental scholar and famous Indian Scientist, was born in Malvan in Ratnagiri district. He was a social reformer and an active member of Prathana Samaj of Bombay.

Dr. Shyama Prasad Mukherjee, great social reformer, politician and leader, was born at Calcutta. He was the founder of the “Bharatiya Janta Sangh”, of which BJP is the successor party.

Dalai Lama, the 14th incarnate and religious leader of Tibet, was born. He was born to Tenzin Gyotso (His Holiness the VIVth Dalai Lama) in Taksten Village, Chhija Nangso, Tibet. He was awarded with Nobel Prize for Peace in 1989.

Urmila Devi Shastri, freedom fighter and editor of “Janma Bhoomi”, died due to non-medical facility and mal-nutrition in Jail. She has also written “Karagaar Ke Anubhav” in 1930. She was arrested for Satyagrah and forcefully closing of Foreign Goods.

Mahatama Gandhi for the first time was addressed as ‘Father of Nation‘.

On this day in 1957, Althea Gibson claimed the women’s singles tennis title at Wimbledon and became the first African American to win a championship at London’s All England Lawn Tennis and Croquet Club.

The President promulgates the ESMA, 1960.

Babu Jagjivan Ram, valiant freedom fighter, passed away. He held many prominent ministerial portfolios such as Communication Minister (1952-56), Railway Minister (1956-62), Food and Agriculture Minister (1967-70), Defence Minister (1970-74). After 1977, he became the Deputy Prime Minister (Defence) in Janta regime. Thereafter, he established Congress (J). His uninterrupted representation in the Parliament from 1936 to 1986 is a world record.(5-4-91).

The centre decided to allow TV and Radio time slots for private producers.

India, Nepal signed agreement to set up a specialist joint unit to counter terrorism and share information about criminals operating along the border.