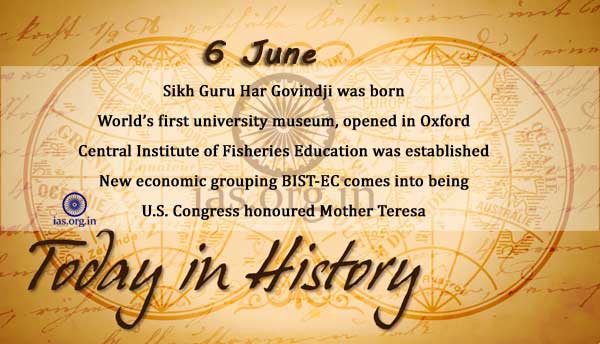 Sikh Guru Har Govindji, the sixth sikh guru, was born. He fashioned a military role for the Sikhs.

The Ashmolean, the world’s first university museum, opened in Oxford, England. At the time of the English Restoration, Oxford was the center of scientific activity in England.

Lord Kitchener, the premier soldier of the British Empire, passed away tragically last night as the ”Hampshire”, the cruiser on which he was traveling to Russia to boost sagging morale, struck a mine or was torpedoed off the Orkney Islands and sank, drowning all aboard. Life in London came to a standstill, while Paris and Washington were shocked by the news. In the last half-century, through tireless energy and devotion to imperial duty, Horatio Herbert Kitchener, 66, commanded in Palestine, Cyprus, Egypt, Sudan, South Africa, and India. Two years ago, he had become the War Secretary.

The first large-scale battle fought by American soldiers in World War I began in Belleau Wood, northwest of the Paris-to-Metz road.

Although the term D-Day is used routinely as military lingo for the day an operation or event will take place, for many it is also synonymous with June 6, 1944, the day the Allied powers crossed the English Channel and landed on the beaches of Normandy, France, beginning the liberation of Western Europe from Nazi control during World War II. Within three months, the northern part of France would be freed and the invasion force would be preparing to enter Germany, where they would meet up with Soviet forces moving in from the east.

Gandhiji wrote to Mountbatten, with Pakistan conceded, to persuade Jinnah to amicable settle all outstanding points with Congress.

Central Institute of Fisheries Education, a deemed university, was established in Mumbai to impart post-graduate education and training, mainly to the in-service fisheries personnel of the country to provide trained manpower for the fisheries developmental activities.

GOI decided to extend validity of passports for 10 years.

All IAF Meteorological Sections were put on high alert from 06 Jun 98, and constant interaction with India Meteorological Department (IMD) at Mumbai and the (IMD) Centre at Ahmedabad resulted in 24 hours tracking and plotting of the cyclone, which was passed down as forecasts to Service and civil authorities in the Saurashtra and Kutch region.