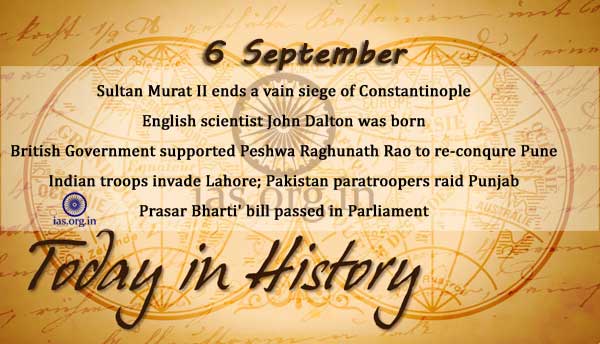 Faced with a critical situation, De la Haye had to capitulate and surrender St Thome to the Dutch who allowed the Sultan of Golconda to re-occupy it.

John Dalton, English scientist who developed the atomic theory of matter, was born.

The last British troops to serve in Austria are withdrawn.

The luxury liner Lusitania leaves London for New York on her maiden voyage.

Indian government creates a new ministry of relief and rehabilitation of refugees.

Full scale warfare broke out all along the international border between West Pakistan and India.

Telecom workers launch a nation-wide strike in protest against inadequate safeguards prior to the corporatisation of the department from October 1.