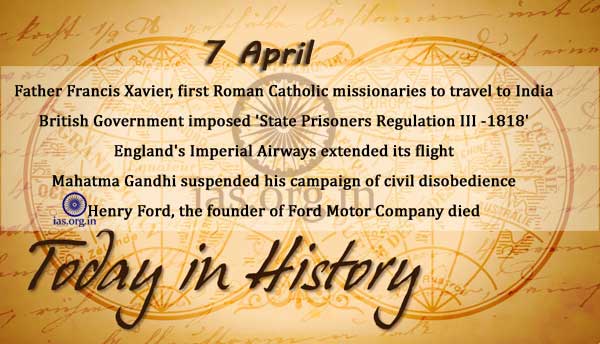 Saint Francis Xavier, Jesuit priest, Spanish missionary teaching in India and Japan, was born in the Spanish kingdom of Navarre.

Father Francis Xavier, Spanish founder of the Jesuits, 35, and three friends set sail from Lisbon, Portugal for Goa. They became the first Roman Catholic missionaries to travel to India.

British Government imposed ‘State Prisoners Regulation III -1818’ for detention and deportion of political prisoners and revolutionaries without any trial. This black act was in force till 1947 when India got independence.

England’s Imperial Airways had extended its flight to London-Karachi instead of London-Kahira. It was the first commercial air service in undivided India.

Mahatma Gandhi suspended his campaign of civil disobedience in India.

Henry Ford, the founder of Ford Motor Company, which developed the first affordable, mass-produced car–the Model T–and also helped pioneer assembly-line manufacturing, dies at his estate in Dearborn, Michigan, at the age of 83.

Charles Sobhraj and his associate David Hall were nabbed at Mapusa in Goa.

In a case filed by Saira Banu of Kerela, Supreme Court held that all wives, including Muslim women, whose husbands have either married again or taken a mistress are entitled to maintenance.

Narsimha Rao,PM, arrives in Bangkok on a three-day visit to Thailand.