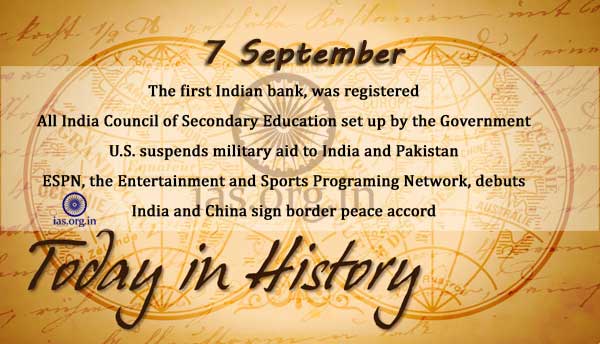 At the Battle of Lepanto in the Mediterranean Sea, the Christian galley fleet destroys the Turkish galley fleet.

The town of Trimountaine in Massachusetts is renamed Boston. It became the state capital.

England, Austria, and the Netherlands form an Alliance against France.

Mahamahopadhyaya Pandit Gopinath Kaviraj, editor and master, was born at Dhamrai in Dhaka now in Bangladesh.

The first heavyweight-title boxing match fought with gloves under Marquis of Queensbury rules ends when James J. Corbett knocks out John L. Sullivan in the 21st round.

Bank of India, the first Indian bank, was registered.

Nikita Krushchev elected first secretary of the Communist Party of the Soviet Union.

All India Council of Secondary Education set up by the Government.

India rejects Pakistan demand for a East Timor type of referendum in Kashmir.