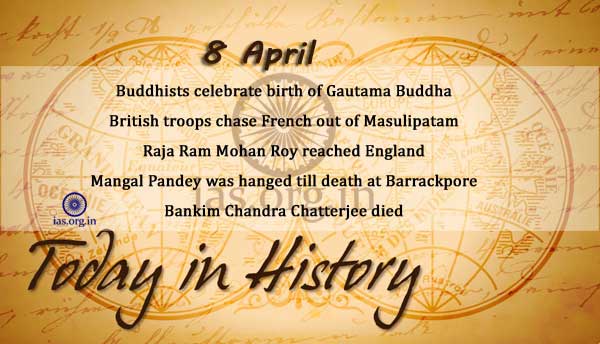 Buddhists celebrate the commemoration of the birth of Gautama Buddha, the founder of Buddhism, who is believed to have lived in India from 563 B.C. to 483 B.C. Actually, the Buddhist tradition, that celebrates his birthday on April 8, originally placed his birth in the 11th century B.C.; and it was not until the modern era that scholars determined that he was more likely born in the sixth century B.C.,  possibly in May rather than April.

Chhatrapati Shivaji Maharaj honoured Hansaji Mohite with the title of ‘Hambirrao’ and appointed him as Chief General of his Army.

Mangal Pandey, the first rebel of Indian mutiny and freedom fighter, was hanged till death at Barrackpore. He struck the first bullet during the time of mutiny against the British Empire.

Bankim Chandra Chatterjee, famous novelist and writer of national song ‘Vande Mataram’, died at the age of 55. Some of his writings are ‘Anandmath’ and ‘Kapal Kundala’.

Gandhiji was arrested on way to Delhi for refusing to comply with order not to enter Punjab; escorted back to Bombay; outbreaks of violence in several towns.

India entered into a historical partnership with France with the formal launch of a joint programme for restoring and protecting the Taj Mahal.