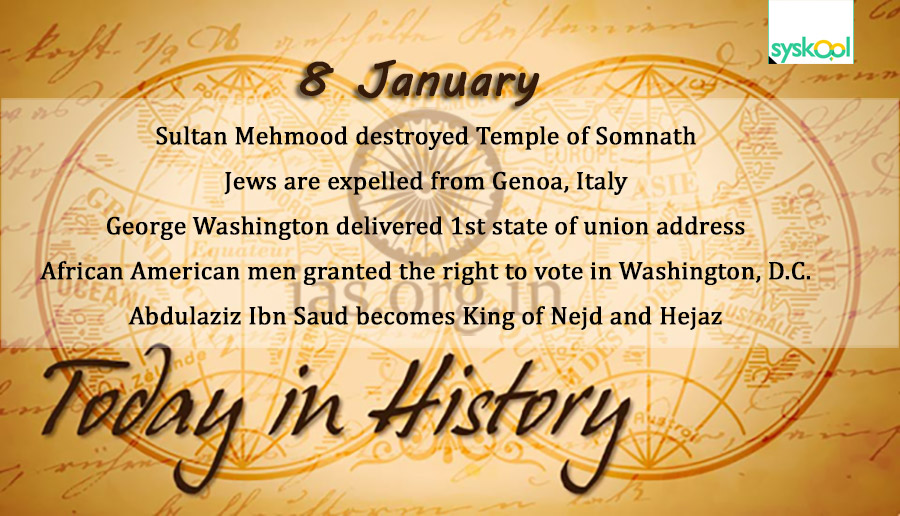 Jews are expelled from Genoa, Italy

The United States national debt became 0 for the first and only time.

Keshav Chandra Sen, nationalist leader of Bengal, social worker and good orator of Brahma Samaj, passed away at his home in Lily Cottage, Calcutta. He was one of the first Indians to sow the seeds of secularism in our country. He strongly believed that education was the basic necessity to change the society.

Abdulaziz Ibn Saud becomes King of Nejd and Hejaz; forerunner of the Kingdom of Saudi Arabia

The first scheduled London-Delhi flight arrives after 63 hrs. Air Minister Sir Samuel Hoare is on board.

The Official Languages Act, 1963 was amended. Accordingly, a provision was made in Section 3 (4) of the Act of the effect that employees of the Union Government proficient either in Hindi or in English may carry out their work effectively and that their interests may no be adversely affected merely because they are not proficient in both the languages. According to Section 3 (5), it is necessary for bringing to an end the use of English language for the Official purposes of the union that resolutions to this effect are passed by the legislatures of the states (i.e. states where Hindi is not the Official Language) and after considring these resolutions, a resolution is passed by both the houses of the Parliament to put an end to the use of English language.

FERA restrictions removed, resident Indians allowed to keep as much as $500.