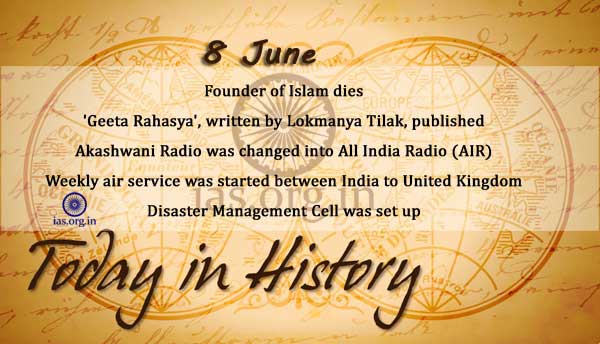 In Medina, located in present-day Saudi Arabia, Muhammad, one of the most influential religious and political leaders in history, dies in the arms of Aishah, his third and favorite wife.

Akashwani Radio was later changed into All India Radio (AIR) in 1958.

‘Malabar Princess’, Air India’s first international flight, takes off from Bombay to London via Cairo and Geneva. This was weekly air service which was started between India to United Kingdom.

On this day in 1948, a hand-built aluminum prototype labeled “No. 1″ became the first vehicle to bear the name of one of the world’s leading luxury car manufacturers: Porsche. The Austrian automotive engineer Ferdinand Porsche debuted his first design at the World’s Fair in Paris in 1900.

During the Six-Day War, Israeli aircraft and torpedo boats attacked the USS Liberty in international waters off Egypt’s Gaza Strip. The intelligence ship, well-marked as an American vessel and only lightly armed, was attacked first by Israeli aircraft that fired napalm and rockets at the ship.

A Disaster Management Cell (DMC) under the direct command of the Air Officer Commanding-in-Chief, South Western Air Command, was set up at the Command Operations Room to liaise with the State Government and initiate necessary actions. All aircrafts were evacuated from IAF bases at Jamnagar, Bhuj and Naliya and flown to pre-determined destinations. In this meticulously planned and smoothly executed drill, more than 60 aircrafts (including helicopters) were flown out.

ATP announced Paes-Bhupathi as No. 1 ranked doubles team. In individual doubles ranking, Bhupathi and Paes were No. 1 and 2 respectively.