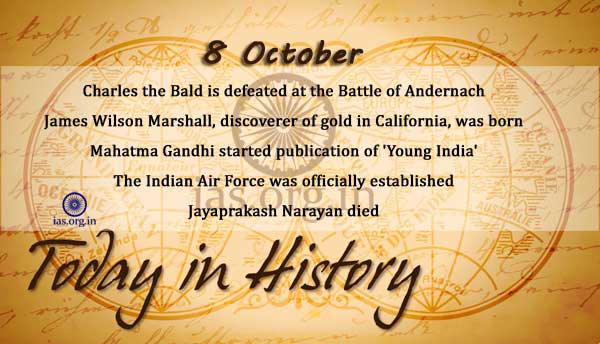 Charles the Bald is defeated at the Battle of Andernach.

James Wilson Marshall, discoverer of gold in California, was born.

Maximilian Harden is sentenced to six months in prison for publishing an article critical of the German Kaiser.

Indian nationalists call a general strike on Prince of Wales’s arrival in Bombay.

Lilian Gatlin becomes the first woman pilot to fly across the United States.

The Indian Air Force was officially established, being the date of its formal constitution as India’s first Air Force.

16 policemen are killed when their vehicle is blown up by PWG naxalites on the Basaguda-Jagargunda road in Madhya Pradesh’s Bastar division.