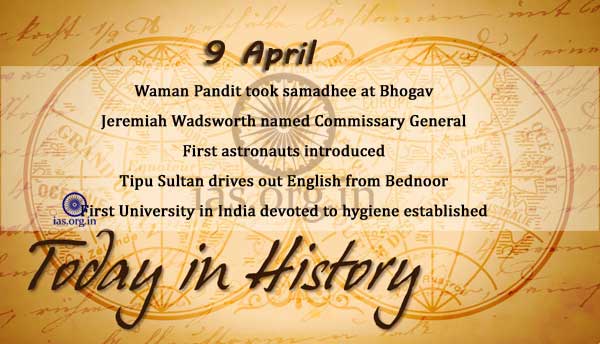 Ali Bardi Khan of Bengal passed away in Murshidabad. His youngest daughter’s son Siraj-ud-Daulah was crowned as King of Bengal when he was merely 20 years old after the death of King Tartar.

Jeremiah Wadsworth is named commissary general of purchases for the Continental Army at the insistence of General George Washington.

In India,according to a published report,  only 43% of population speaks 15 recognized languages, noting 720 dialects, 23 tribal tongues.

Fighting breaks out in the Rann of Kutch between Indian and Pakistani troops. Pakistan attacked Indian borders, Sardar Post, Chhar Bet and Beria Bet, this was manned by the State Armed Police Batallions. In Kutch was launched its 8th Infantry Division supported by two regiments of M47/48 Pattons. Operation ‘Desert Hawk’ was launched to draw away reserves from other vulnerable areas, and possibly to test India’s resolve. The Indian Army did not rise to the bait.

After Indo-Pak conflict of 1965, the Raksha Medal, Samar Seva Star and some others were introduced.

India, Pakistan, Bangladesh agreed to a  pact to exchange prisoners of 1971 war in New Delhi.

Captain H.J. Singh of Indian Army crossed the Banihal Darsh with the help of Hand Glider and set a new record.

First University in India, devoted to hygiene, was established at Vijaywada.