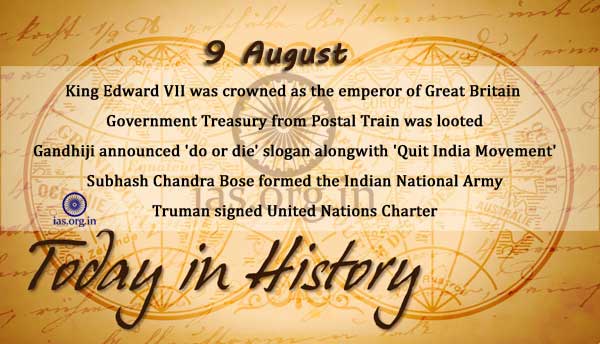 Gulam Kadir removed the eyes of Shah Alam 2nd, King of Delhi with a knife.

Shri Shiyali Ramamrita Ranganathan, prolific author and first librarian of the University of Madras, was born.

King Edward VII was crowned as the emperor of Great Britain at Westminster Abbey after the death of his mother Queen Victoria. Earlier, he had held a grand function in which nearly 4,56,000 invitees celebrated this royal feast.

Government Treasury from Postal Train was looted near Kakuri Station just about 22 km. away from Lucknow by the members of ‘Hindustan Socialist Republican Association.’

The Congress at its Bombay session passed the famous Quit India resolution, calling for mass struggle on non-violent lines on the widest possible scale, under the leadership of Gandhiji. He stressed that “We shall either free India or die in the attempt; We shall not live to see the perpetuation of our slavery“; popularly known as “Do or Die”. But before the Congress could start the movement, the government arrested all the major leaders and the Congress was declared illegal. Spontaneous popular revolts broke out with the battle cry of ‘British Quit India Movement’.

Mahatma Gandhi after announcing ‘do or die’ slogan alongwith ‘Quit India Movement‘ at Bombay was arrested along with 50 others. Gandhiji was interned in Aga Khan Palace at Poona. This Do or Die slogan deep rooted in Indian hearts and resulted in nationwide Quit India Movment. This day is commemorated as “Kranti Day”. Govind Vallabh Pant was send to Ahmednagar Jail, while Sarojini Naidu and many other leaders were also arrested.

Subhash Chandra Bose (Netaji) formed the Indian National Army in Malaya with the help of the Japanese. He inaugurateed the Government of Free India at Singapore.

India is the first country to add its signature to the test-ban treaty at Moscow.

Pakistan chose to persist while the Indian Army Corps on the ceasefire line got down to neutralizing the Gibraltar Force. As a first step, main infiltration routes were blocked and Pakistan was forced out of the Haji Fir bulge (known to them as Bedori).

Heroes of the 1942 movement were honoured at a rally in Red Fort.

Ochterlony Memorial in Calcutta was renamed as ‘Shahid Minar’.

A 20-year non-aggression treaty for peace, friendship and co-operation was signed between India and U.S.S.R.

Parliament approved the Madhya Pradesh Reorganisation Bill 2000, paving the way for the creation of a separate Chhattisgarh State