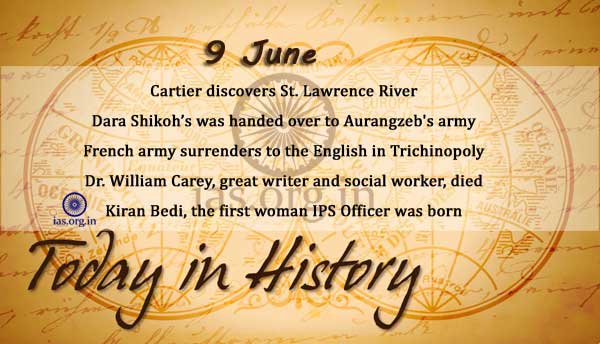 French navigator Jacques Cartier became the first European explorer to discover the St. Lawrence River in present-day Quebec, Canada. In 1534, Cartier was commissioned by King Francis I of France to explore the northern American lands in search of riches and the rumored Northwest Passage to Asia.

Dara Shikoh was handed over to Aurangzeb‘s army by Jiwan Khan, a Baluchi whose life was saved by Dara.

French army surrendered to the English in Trichinopoly, India.

Lal Bahadur Shastri became the second Prime Minister of India when the country was shocked of Jawaharlal Nehru‘s death and Indo-China war. Shastri gave the quotation “Jai Jawan Jai Kisan” which motivated the war-affected Indians to boost their morale. He remained in this office till he died on January 11, 1966 at Taskent. In his cabinet, Indira Gandhi served as Minister of Information and Broadcast.

With a spectacular victory at the Belmont Stakes, Secretariat became the first horse since Citation in 1948 to win America’s coveted Triple Crown–the Kentucky Derby, the Preakness, and the Belmont Stakes. In one of the finest performances in racing history, Secretariat, ridden by Ron Turcotte, completed the 1.5-mile race in 2 minutes and 24 seconds, a dirt-track record for that distance.

ICMR set up a network of Reference/Surveillance Centres for AIDS in almost all states of India.

Gujarat was hit by a cyclone killing 1,000 people in six days.

81 persons were killed as cyclone hit the Saurashtra and Kutch regions of Gujarat and Jalore district of Rajasthan. Subsequently, the toll is put at 934 in the Kutch-Saurashtra region alone.