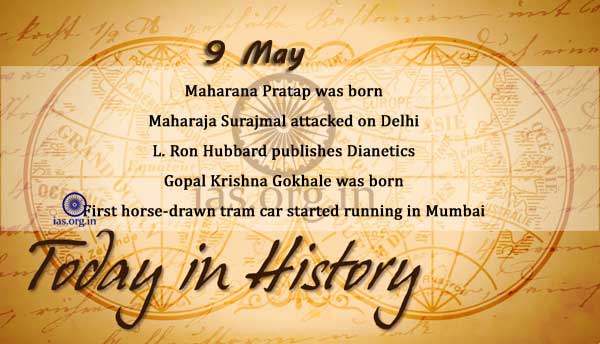 Maharana Pratap, great soldier and a great King , was born.

On this day in 1791, Francis Hopkinson, signer of the Declaration of Independence and the first American secular composer, died suddenly of a seizure in Philadelphia, Pennsylvania.

Gandhiji announced suspension of Civil Disobedience Movement for six weeks and called on the Government to withdraw its Ordinances.

On this day in 1950, Lafayette Ronald Hubbard (1911-1986) published Dianetics: The Modern Science of Mental Health. With this book, Hubbard introduced a branch of self-help psychology called Dianetics, which quickly caught fire and, over time, morphed into a belief system boasting millions of subscribers: Scientology.

Durga Bai Deshmukh passed away at Hyderabad. She was a social reformer, freedom fighter, planner, administrator, educationist and parliamentarian. She worked for peace, social welfare and for betterment of the downtrodden.

Militants set Charar township on fire in the vicinity of the Charar-e-Sherif shrine. More than 1,000 houses burnt.

Two new gas and oil reserves found off the Gujarat and Bombay coast.

Today in History – 5 May

Today in History  7 May

Previous articleSmita Sabharwal IAS Topper from Hyderabad – A Role Model for Youth
Next articleA Women officer inspiration to all.