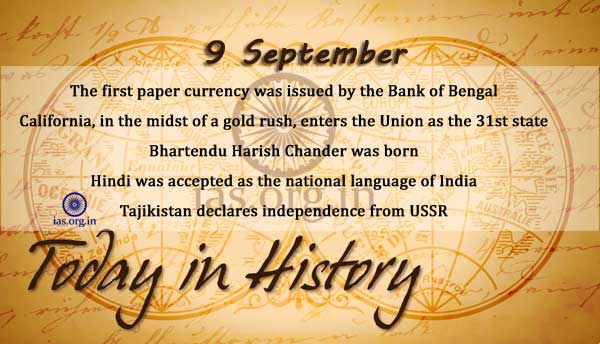 King James IV of Scotland is defeated and killed by English at Flodden.

George Washington calls for the abolition of slavery.

The first paper currency was issued by the Bank of Bengal. The notes of this bank were later printed by Perkins, Heath & Co. in England. They can be distinguished into at least 10 different types.

California, in the midst of a gold rush, enters the Union as the 31st state.

Explosive Department of India was established at Nagpur.

An airmail route opens between London and Windsor.

Anglo Oriental College of Aligargh became Aligarh Muslim University. It was the first university to use the regional language.

The Radio Corporation of America creates the National Broadcasting Co.

Kim Il-sung declares the establishment of the Democratic People’s Republic of Korea.

Hindi was accepted as the national language of India.

US Department of Housing and Urban Development established.

Mr. V. Sudarshan, Foreign Editor of The Pioneer till recently gets the Appan Menon Award.