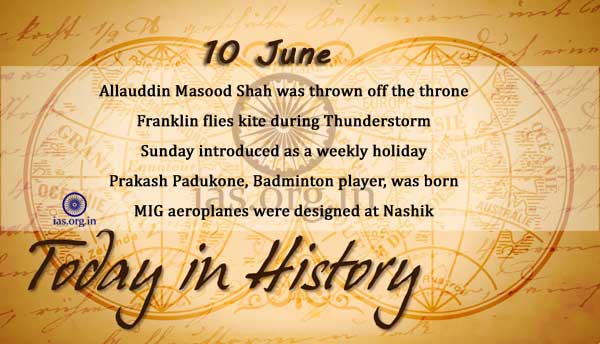 Allauddin Masood Shah, Sultan of Dehli, was thrown off the throne.

On this day in 1752, Benjamin Franklin flied a kite during a thunderstorm and collected a charge in a Leyden jar when the kite got struck by lightning, enabled him to demonstrate the electrical nature of lightning. Franklin became interested in electricity in the mid-1740s, a time when much was still unknown on the topic, and spent almost a decade conducting electrical experiments. He coined a number of terms used today, including battery, conductor and electrician. He also invented the lightning rod, used to protect buildings and ships.

Sunday introduced as a weekly holiday.

Gandhiji was called to the Bar.

Gandhiji refused to enthuse over allied victory as it was not a “victory of truth”.

MIG aeroplanes were designed at Nashik.

In South Africa, the African National Congress (ANC) made public a statement by Nelson Mandela, the long imprisoned leader of the anti-apartheid movement. The message, smuggled out of Robben Island prison under great risk, read, “UNITE! MOBILISE! FIGHT ON! BETWEEN THE ANVIL OF UNITED MASS ACTION AND THE HAMMER OF THE ARMED STRUGGLE WE SHALL CRUSH APARTHEID!”

On this day in 1991 at Clark Air Base in the Philippines, 14,500 personnel were evacuated in anticipation of the eruption of Mount Pinatubo. Over the next several days, the eruptions killed hundreds of people and sent tons of ash and sulfur dioxide into the atmosphere.