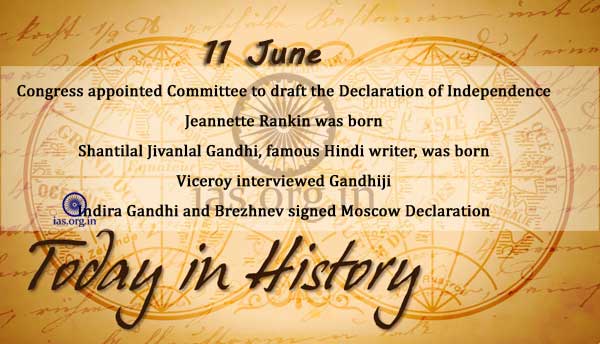 On this day in 1776, the Continental Congress selected Thomas Jefferson of Virginia, John Adams of Massachusetts, Benjamin Franklin of Pennsylvania, Roger Sherman of Connecticut and Robert R. Livingston of New York to draft a declaration of independence.

Jeannette Pickering Rankin, the first woman ever elected to Congress, was born on a ranch near Missoula, Montana Territory. Rankin was a social worker in the states of Montana and Washington before joining the women’s suffrage movement in 1910.

Indira Gandhi and Brezhnev signed the Moscow Declaration of Friendship and Cooperation.

I.K. Gujral, PM, asserted that India had not deployed the `Prithvi’ ballistic missile anywhere in the country or on the border.

Jaspal Rana and J. Abhijit in the men’s section and Nisha Millet in the women’s section adjudged best sports persons of the National Games.

India provided incontrovertible tape evidence of Pakistan’s involvement in the Kargil sector. The Indian army killed 23 intruders in the Batalik and Dras sectors but lost 15 of its men.