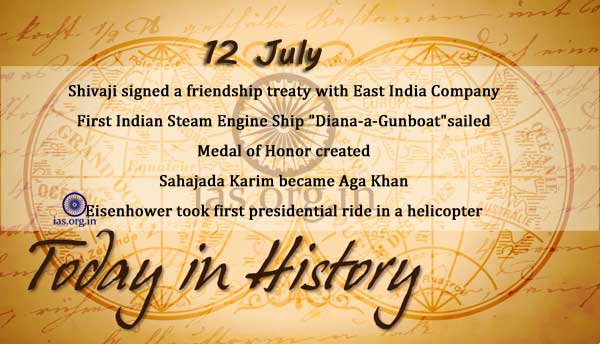 Bahlul Khan Lodi, an Afghan and founder of Lodi dynasty, died in Delhi.

Husain Quli, the Governor of Bengal, defeated the rebels and put them to fight. Daud was captured and put to death.

First Indian Steam Engine Ship “Diana-a-Gunboat”sailed in a sea near Calcutta. It was built by Kyd & Company.

President Abraham Lincoln signed into law, a measure calling for awarding a U.S. Army Medal of Honor, in the name of Congress, “to such non-commissioned officers and privates that most distinguish themselves by their gallantry in action, and other soldier-like qualities during the present insurrection.”

The 16,000-foot Shyok ice dam in the Himalayas bursted while flooding in the Indus Valley at Kashmir.

On this day in 1957, Dwight D. Eisenhower became the first president to ride in the newest advance in aviation technology: the helicopter.

Bhagalpur University was established in Bihar.

Major flood in Alaknanda river resulted in sweeping of buses and claimed 6000 lives.

Congress (I) gets absolute majority in Rajya Sabha.

Walter Mondale, the leading Democratic presidential candidate, announceed that he has chosen Representative Geraldine Ferraro of New York as his running mate.

On this day in 1995, a heat advisory was issued in Chicago, Illinois, warning of an impending record-breaking heat wave. By the time the heat broke a week later, nearly 1,000 people were dead in Illinois and Wisconsin.

India will not reverse the nuclear programme, declared Mr. Vajpayee.