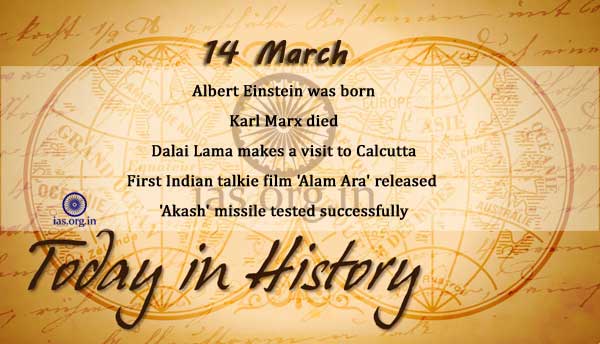 Albert Einstein was born, the son of a Jewish electrical engineer in Ulm, Germany. Einstein’s theories of special and general relativity drastically altered man’s view of the universe, and his work in particle and energy theory helped make possible quantum mechanics and, ultimately, the atomic bomb.

Dalai Lama makes a rare state visit to the Viceroy of Calcutta.

Max Brand, perhaps the most prolific writer of western stories, publishes his first novel, The Untamed. Max Brand was one of 21 pen names used by the Seattle-born author Frederick Faust.

First Indian talkie film ‘Alam Ara’ released at Majestic Cinema, Bombay. Directed by Ardeshir Irani, the film was 11,152 ft. long and was produced by Imperial Film Co., Bombay and beared censored No. 10043 on March 11. The most remarkable thing about this film was birth of sound in Indian films, it came with a bang and quickly displaced the silent movies and brought revolutionary changes in the whole set up of the industry.

The Federal Bureau of Investigation institutes the “Ten Most Wanted Fugitives” list in an effort to publicize particularly dangerous fugitives. The creation of the program arose out of a wire service news story in 1949 about the “toughest guys” the FBI wanted to capture.

Border Security Force discovers a 34-meter long tunnel in the Ajnala Sub-sector of the Punjab border with Pakistan.