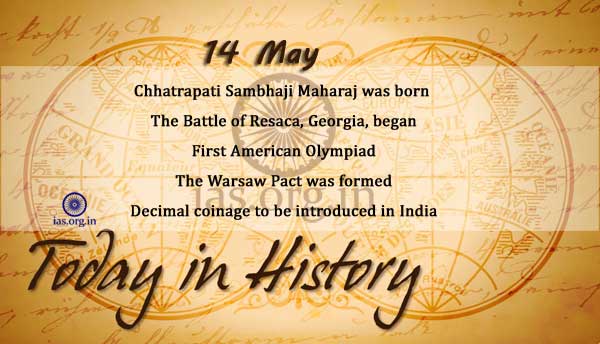 On this day in 1787, delegates to the Constitutional Convention begin to assemble in Philadelphia to confront a daunting task: the peaceful overthrow of the new American government as defined by the Article of Confederation. Although the convention was originally supposed to begin on May 14, James Madison reported that a small number only had assembled. Meetings had to be pushed back until May 25, when a sufficient quorum of the participating states—Massachusetts, New York, New Jersey, Pennsylvania, Delaware, Virginia, North Carolina, South Carolina and Georgia—had arrived.

On this day, Union and Confederate troops clash at Resaca, Georgia. This was one of the first engagements in a summer-long campaign by Union General William T. Sherman to capture the Confederate city of Atlanta. The spring of 1864 saw a determined effort by the Union to win the war through major offensives in both the eastern and western theaters. In the east, Union General Ulysses S. Grant took on Confederate General Robert E. Lee, while Sherman applied pressure on the Army of the Tennessee, under General Joseph Johnston, in the west. The Atlanta campaign was dictated by the hilly terrain of northern Georgia.

The Third Olympiad of the modern era, and the first Olympic Games to be held in the United States, opens in St. Louis, Missouri. The 1904 Games were actually initially awarded to Chicago, Illinois, but were later given to St. Louis to be staged in connection with the St. Louis World Exposition. Like the Second Olympiad, held in Paris in 1900, the St. Louis Games were poorly organized and overshadowed by the world’s fair.

Narayan Ganesh Chandavarkar, one of the founder members of Indian Congress and social reformer, passed away.

President issued an order extending application of Indian Constitution to Kashmir with the concurrence of the State government.

The Soviet Union and seven of its European satellites signed a treaty establishing the Warsaw Pact, a mutual defense organization that put the Soviets in command of the armed forces of the member states.

Govt announced that decimal coinage to be introduced in India from April 1, 1957.

Dr. Raghuvir, a famous linguist and President of Jansangh, passed away.

Skylab, America’s first space station, was successfully launched into an orbit around the earth. Eleven days later, U.S. astronauts Charles Conrad, Joseph Kerwin, and Paul Weitz made a rendezvous with Skylab, repairing a jammed solar panel and conducting scientific experiments during their 28-day stay aboard the space station.

LTTE banned for the second time under the Unlawful Activities (Prevention) Act, 1967.

L. K. Advani, Union Home Minister, announced the extension of the ban on the LTTE by two more years.