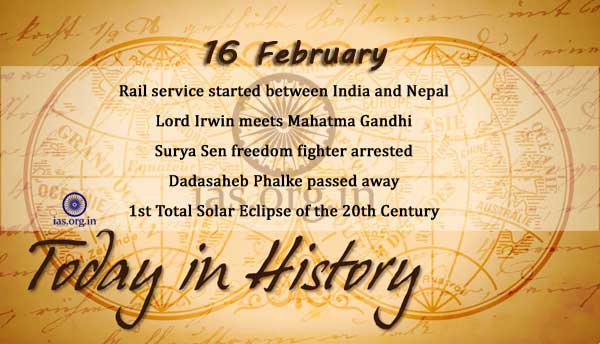 Surya Sen Masterda, revolutionary freedom fighter, who attacked the Armoury of Chittagong with 62 men of the Indian Republican Army and was underground on Jalalabad Hills, was arrested.

Dadasaheb Phalke passed away in Nasik at the age of 74. He is remembered as the ‘Father of Indian Cinema’. He produced India’s first feature Film, ‘Raja Harishchandra’. He was Director, Producer, Writer, Editor & Laboratorian. Dada Saheb Phalke Award issued by Government of India is given in his memory.

The first visible Total Solar Eclipse of the 20th Century was seen. This succeeded the total solar eclipse after 22 June 1898.

Recent Articles of Today in History