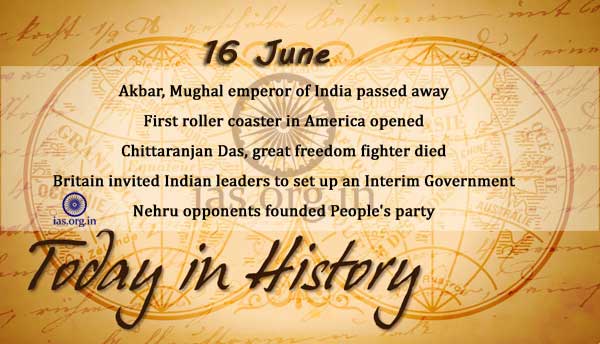 Akbar (Abul-Fath Djalal-ud-Din), Mughal emperor of India (1556-1605), passed away of diarrhoea or dysentery at the age of 63 years. At Akbar’s graveside, stood conspicious in his simplicity, Jesuit priest Father Xavier who always remained his devoted friend. (16 or 17).

On this day in 1858, newly nominated senatorial candidate Abraham Lincoln addressed the Illinois Republican Convention in Springfield and warned that the nation faces a crisis that could destroy the Union. Speaking to more than 1,000 delegates in an ominous tone, Lincoln paraphrased a passage from the New Testament: “a house divided against itself cannot stand.”

On this day in 1884, the first roller coaster in America opened at Coney Island, in Brooklyn, New York. Known as a switchback railway, it was the brainchild of LaMarcus Thompson, travelled approximately six miles per hour and cost a nickel to ride.

Britain invited Indian leaders to set up an Interim Government at London.

On June 16, 1963, aboard Vostok 6, Soviet Cosmonaut Valentina Tereshkova became the first woman to travel into space. After 48 orbits and 71 hours, she returned to earth, having spent more time in space than all U.S. astronauts combined to that date.

K. R. Narayanan, Vice-President, was the joint candidate of Congress(I) and United Front for Presidentship in July 14 election.