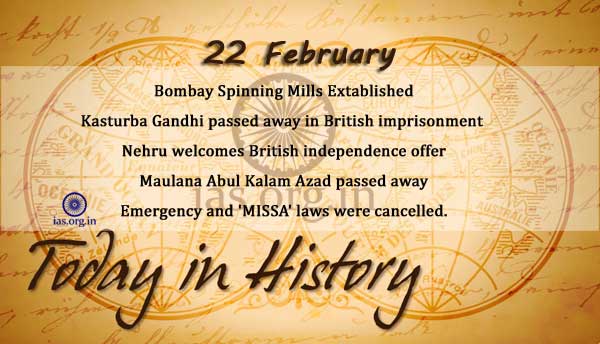 Kasturba Gandhi passed away in British imprisonment in Aga Khan Palace at Pune.

Also Read: Brief biography of Mahatma Gandhi – A Journey from Mohandas to Mahatma

Maulana Abul Kalam Azad passed away in New Delhi, India. He was a great leader, great orator, revolutionary and fighter for national freedom. Some of his works which are the masterpieces of the Urdu language are “”Ghubari-Khatir”” and Tadhkirah””. He was Minister of Education in the first Indian Government.

Emergency and ‘MISSA’ laws were cancelled.

Judge Yeshwant Vishnu Chandrachud became the Chief Justice of India. He held this office till 11/07/1985. He was the longest-serving Chief Justice in India’s history at 7 years and 4 months.