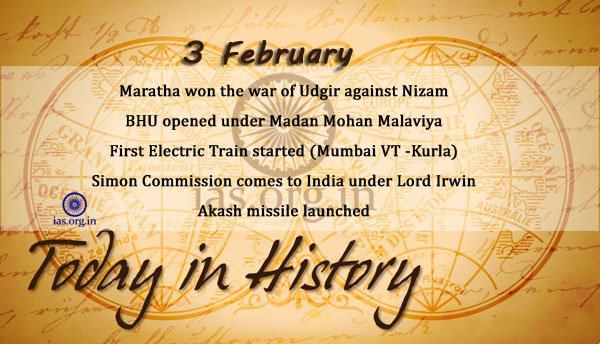 Sadashiv Bhau, under a large Maratha army, defeated the Nizam in War of Udgir.

Banaras Hindu University was opened under the guidance of Madan Mohan Malaviya in Varanasi, Uttar Pradesh.

It is still one of the largest residential universities in Asia with a strength of over 20,000 students. BHU is a public central university.

First Electric Train started its journey from Bombay V. T. (presently known as C.S.T.) to Kurla. This train was on the Central Railway, Bombay.

The train was electrified on 1500 Volt DC. Later the electric line was first extended to Nasik’s Lagatpuri and then to Puna. Till Indian independence in 1947 around 388 km of Railway was electrified in the country.

Simon Commission comes to India under Lord Irwin, after which serious rioting started on his arrival.