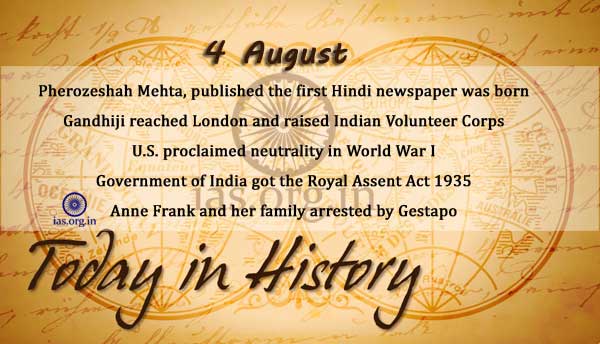 Pherozeshah Mehta, who published the first Hindi newspaper and one of the founders of Indian National Congress, was born in Bombay.

Dr. Yashwant Singh Parmar, the architect of modern Himachal Pradesh and an energetic Chief Minister, was born at Chanhalag village in Sirmaur.

As World War I erupted in Europe, President Woodrow Wilson formally proclaimed the neutrality of the United States, a position that a vast majority of Americans favored, on August 4, 1914.

Gandhi was imprisoned for one year for breaking a restraint order.

Government of India got the Royal Assent Act 1935.

Indian Government Act was approved by the king.

Anne Frank and her family arrested by Gestapo

The remains of three civil rights workers whose disappearance on June 21 garnered national attention were found buried in an earthen dam near Philadelphia, Mississippi. The disappearance of the three young men led to a massive FBI investigation that was code-named MIBURN, for “Mississippi Burning.”

World’s longest and highest Dam ‘Nagarjun Sagar’ made by Masonary System was inaugrated.

Nilesh Kulkarni became the first Indian to take a wicket with his first ball in Test Cricket (Colombo).

Supreme Court declared that the Rashtrapati Bhavan press communique of 23/1/1992 on a proposal to confer the Bharat Ratna ‘posthumously’ on Netaji Subhas Chandra Bose “should be treated as cancelled”, as the proposal was dropped by the Government in deference to the sentiments expressed by the public and his family members.

Queen Elizabeth, the Queen Mother and the last member of the British royal family to bear the title ”Empress of India”, celebrated her 100th birthday.

On this day in 2012 in London, Oscar Pistorius of South Africa becames the first amputee to compete at the Olympics by running in an opening heat of the men’s 400-meter.