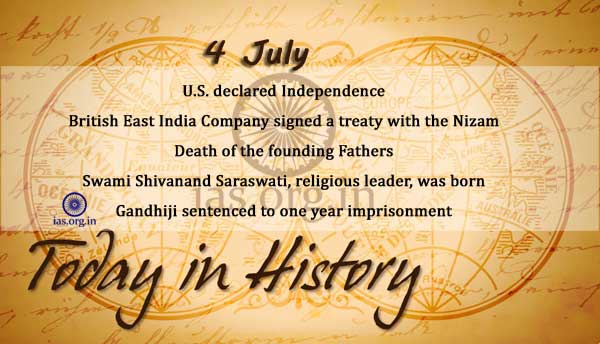 In Philadelphia, Pennsylvania, the Continental Congress adopted the Declaration of Independence, which proclaimed the independence of the United States of America from Great Britain and its king.

British East India Company signed a treaty with the Nizam of Hyderabad and Peshwa of Pune against Tipu Sultan, King of Mysore, on the understanding that a cavalry of 10,000 would attack Tipu’s territory and the conquered area would be divided amongst the three.

John Adams and Thomas Jefferson, the second and third presidents of the United States, respectively, died on this day within five hours of each other, the 50th anniversary of the adoption of the Declaration of Independence. Both men had been central in the drafting of the historic document; Jefferson had authored it, and Adams, who was known as the “colossus of the debate,” served on the drafting committee and had argued eloquently for the declaration’s passage.

Alluri Seetaram Raju, freedom fighter, was born in a Kshatriya clan in Andhra Pradesh. He is rememberred as one of the great sons of India in the annals of Indian history who fought valiantly for his motherland in the early period of the freedom movement.

Swami Vivekanand (Narendra Vishwanath Dutta), Indian religious leader and social reformer, died at Memorial Rock, KanyaKumari. His brilliant career came to a sudden end only at the age of 39.

Union Deputy Ministers were promoted to the rank of Ministers of State.

Sanskrit made a compulsory subject from sixth to intermediate classes in Uttar Pradesh.

The Indian Army recaptured Tiger Hill after a 11 hour assault, and hoisted the tri-colour atop the 16,500 ft. peak.