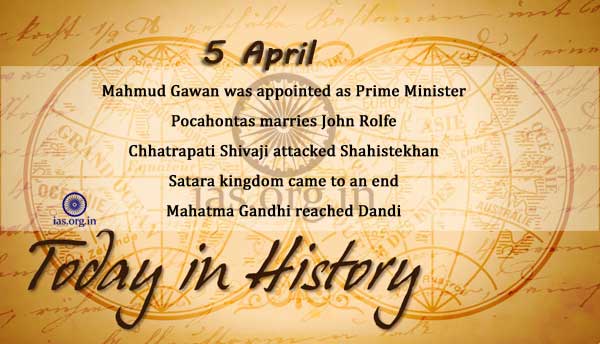 Mahmud Gawan was appointed as Prime Minister, an office which he held till his execution.

Satara kingdom came to an end.

Babu Jagjivan Ram, a valiant freedom fighter, was born in Chandwa village in Bhojpur, Bihar. He held many prominent ministerial portfolios such as Communications Minister (1952-56), Railway Minister (1956-62), Food and Agriculture Minister (1967-70) and Defence Minister (1970-74). After 1977, he became the Deputy Prime Minister (Defence) in Janta regime. Thereafter, he established Congress (J). His uninterrupted stint in the Parliament from 1936 to 1986 is a world record. This day is commemorated as “”Samta Diwas”.

Mahatma Gandhi reached Dandi, a small costal village in Gujarat, after travelling 385 kms with 78 followers to break the recently imposed “”Salt Law””. This event is known as ‘Dandi March’ and was started from Sabarmati Ashram near Ahmedabad

Charles Freer Andrews, a Christian Missionary, died in Calcutta. He is also referred as “Deenabandhu Andrews”

221 Advance Base Depots laid down their lives to repulse several waves of Japanese attacks and succeeded in safe evacuation of Ordnance stores to an alternate site.

Indian Boy Scout and Girl Guide were established and renamed as Bharat Scouts and Guides.

Spurred by recent clashes in East and West Bengal between Muslims and Hindus, Indian Prime Minister Jawaharlal Nehru and his Pakistani couterpart Ali Khan today reached an agreement on a “”Bill of Rights for Minorities””. This bill included a provision for “”drumhead justice,”” or summary justice to persons convicted of violating minorities’ rights.

Indian Drugs and Pharmaceuticals Limited was established in New Delhi by Indian Government for allopathic drugs.

Mrs.Sheela Flather, an Indian national, becomes the first Asian to be nominated to the House of Lords.

Previous articleToday in History – 4 April
Next articleEarly Entrepreneurs of India