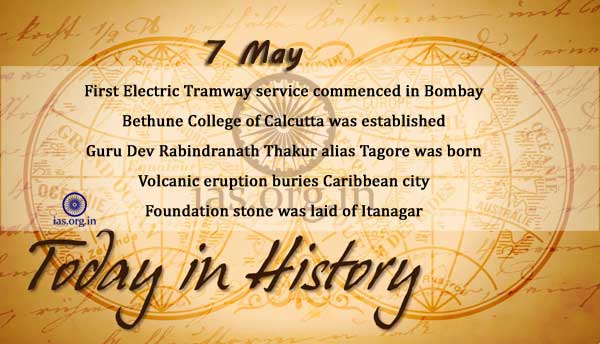 Bethune College of Calcutta was established in the upper class families and it was started for female education.

On this day in 1902, Martinique’s Mount Pele begins the deadliest volcanic eruption of the 20th century. The following day, the city of Saint Pierre, which some called the Paris of the Caribbean, was virtually wiped off the map.

Acharya Kripalani elected leader of a new opposition group in the Lok Sabha.

The foundation stone was laid of Itanagar, the new capital of Arunachal Pradesh.

Foundation stones are laid in Ayodhya for a new temple at the birthplace of Lord Rama as Hindu nationalism rises. Government disallows the Shilanyas.

Government of India bans strikes in any service in any oil field or refinery under the Essential Services Maintenance Act.

Dr. G.V. Satyavati, by taking over as the new Director-General of ICMR in July 1994, became the first women  scientist in the country to head not only ICMR but any Research agency in independent India.

Ustad Jahiruddin Dagar Nasir, famous classical singer of Dhrupad-Dhamar, passed away at the age of 62 in Bareilly.

On May 7, 1994, Norway’s most famous painting, “The Scream” by Edvard Munch, was recovered almost three months after it was stolen from a museum in Oslo. The fragile painting was recovered undamaged at a hotel in Asgardstrand, about 40 miles south of Oslo.

Third and final phase of polling begins for 185 LS constituencies and 154 assembly constituencies; 55 to 60% turnout was witnessed and there was widespread violence in Bihar.

Today in History – 5 May

Today in History – 4 May

Today in History – 3 May