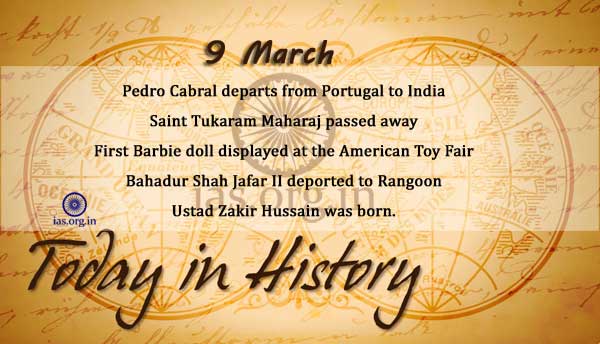 Pedro Cabral departs from Portugal with 13 ships to India.

On this day in 1862, one of the most famous naval battles in American history occurs as two ironclads,the U.S.S.Monitor and the C.S.S. Virginiafight to a draw off Hampton Roads, Virginia.

Bahadurshah Jafar II, the last Mughal Emperor, was deported to Rangoon under the offence for rising of first Indian Mutiny in 1857.

On this day in 1959, the first Barbie doll goes on display at the American Toy Fair in New York City.Barbie was the first mass-produced toy doll in the United States with adult features. The woman behind Barbie was Ruth Handler, who co-founded Mattel, Inc. with her husband in 1945.

Bangladesh and Chakma refugee leaders sign a historic agreement for repatriation of the 50,000 refugees sheltered in six camps in Tripura for the past 11 years.